It’s kinda funny that summer just officially started and I’m already pretty much done with my summertime excitement.  But it’s all good. With a baby on the way, I’m happy to get my fun in while I still can. And that’s what we did.  We went to London to celebrate our tenth wedding anniversary, as a babymoon, and as kind of our last hurrah because with two kids, we probably won’t have time for cool international trips for a long time.

Can I just tell you how awesome London is?  It really is.  I’ll admit we chose London based on how easy it was to get there – it was the most bang for our air miles. But wow.  Just walking around that city is amazing. I feel like we barely made a dent in everything there is to see and do there.  We took it slower than we had planned (my pregnancy kind of tired me out more than I thought it would), but it was still a great time to be there, especially since we were there for the final celebrations of the Queen’s Jubilee.

We visited some great sites, but mostly we just took it easy and enjoyed our time.  Looking back, we probably should have done a quiet, relaxing vacation, not a ‘here’s a great city that you need to soak up’ kind of trip, but I’m happy we got the chance to do this.  I could bore you with the details of the sites and attractions we saw, but I thought I’d share some of the cooler moments that you won’t find in a guidebook:

Lushness: I don’t expect a city to be lush and green.  I knew London had tons of parks, but I wasn’t prepared for all the businesses having flower boxes and hanging plants.  Some places looked like mini tropical rainforests with greenery cascading everywhere.  Especially the pubs.  They were always colorful and lush.  It’s like little beacons of joy in a city of gray.  This lushness added so much charm and warmth to what could be a cold, gray, uninviting city.

Fiction Meets Reality:  I walked down Drury Lane (as in, “Do you know the muffin man who lives on Drury Lane?”).  I hopped on a train at Paddington Station, home of Paddington Bear.  I rode past Hampstead Heath, where countless girls in my favorite chick-lit novels go on their lunch breaks and/or romantic dates. I also shopped for groceries at Marks and Spencers’, where all those girls seem to get all their nutrition.  I strolled by St. James’ where Sir Lucas (of Pride and Prejudice fame) was presented. I kissed my husband same altar where just a year ago, William and Kate got married (I know that’s not fiction, but kind of surreal, you know?).  It’s like all these things I read about came to life right in front of me. 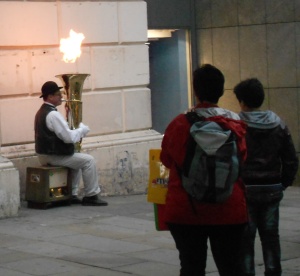 Street Life: I saw a guy playing a flaming tuba.  I saw a group of musicians playing the lambada on the tube (underground/subway…whatever you want to call it). I saw a guy in short shorts and a tank top walking around one of the ritziest areas in the world in the middle of the work day (was he perhaps going to a WHAM! party in the middle of the day?)  This kind of stuff simply doesn’t exist in my world.  I live in the suburbs of North Carolina.  I get in my car, drive where I’m going, have a good time, get back in my car and go home.   Occasionally, a kid might draw a penis with sidewalk chalk in my neighborhood, but that’s about as crazy as it gets here in the burbs.  It’s nice to see such life and activity buzzing around you all the time.

The Hubs: Hands down the best part of the trip. It’s so nice to spend time with my hubby and not have to worry about bedtimes, diapers, keeping a toddler entertained, etc.  Maybe I’m just selfish.  But I think it’s so important for us to have time to ourselves.  Date nights are great, but it seems that having everything ready for a sitter, making sure the pj’s are laid out, dinner is made and all that jazz is barely worth the hassle for a couple of hours in the burbs.  It was nice to have conversations, and be out after dark, explore a new place and just be together. We even had a picnic at the gardens around Buckingham Palace.  My favorite ‘us’ moment was when we checked into our second hotel.  They had white wine and truffles waiting for us in the room – nice!  Of course, I couldn’t have the wine, but happily dove into one of the truffles…only to find it was about 50% rum.  So, he took it upon himself to test them, and if one didn’t have liquor, he let me have it.  He enjoyed the spoils, but it was sweet of him to share with me.

What are some of your favorite vacation moments?