A few years ago when we were shopping for nursery furniture for my son, we found a glider in what we thought was a great neutral color that will work in any future baby’s room, whether it’s a boy or girl.  The taupe-y cushions looked great in our son’s woodland-themed nursery and the microfiber was soft and easy to keep clean: 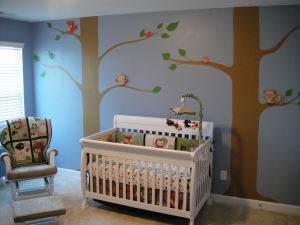 But flash forward to a few weeks ago, when we put it in our light, bright aqua girl’s nursery and it looked like baby poop: 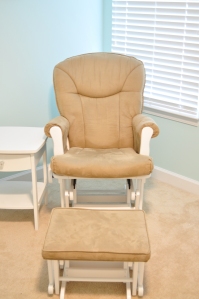 So what’s a hormone-raging mama-to-be supposed to do? Have a panic attack about how I can’t possibly have that glider in this room, or else some awful catastrophe will happen. Totally normal, right?

Well, I wasn’t that melodramatic, but close.  Still, I was really intimidated at the thought of recovering the cushions.  I mean, I’m used to coffee cuffs, notebook covers and bags.  Cushions are big.  But when a 60% off coupon for Joann’s arrived on my smartphone, the project didn’t seem so bad.  At least I wouldn’t be out too much money if the project was a bust.  So armed with 4.25 yards of fluffy pink fabric (which is enough for the glider, a blanket and more), I set to work.

I began by laying out the cushions on freezer paper, my pattern-making material of choice.  I had to tape two pieces together for the back and seat cushions to get it wide enough.

Then, I traced around each cushion.  After that, I used a compass (yes, the ones that gave you headaches back in ninth-grade geometry) to give myself room for the cushion depth. There’s probably a good way to measure this, but my pregnant brain wouldn’t process it correctly anyway, so I guesstimated how much to add. I ended up with an extra two inches except for the front of the seat cushion that’s a little thicker.  I went with three inches for that.

After cutting out the paper templates, I pinned them to the fabric and cut out the pieces. Next, I pinned the fabric pieces right sides together and stitched them together, leaving one side open to stuff the cushions.  I added two 20-inch lengths of grosgrain ribbon where the straps that snap to the chair on the back cushion so I could tie it on instead of trying to make little covers for the straps.

And this is where I began to cheat and get lazy.  I decided to just safety-pin the back cushion closed, since it rests on the seat cushion and I wasn’t going to see the closing anyway. I didn’t want to sew more ties or deal with a zipper/velcro closure, and I hate it when cushions are sewn shut because then it’s so much harder to pull the covers off to wash them.  I pinned the seat cushion closed as well, which allowed me to use the ties from the original cushion. 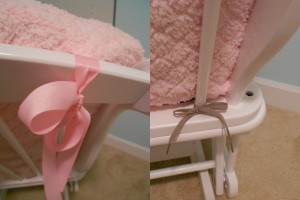 For the arm rests, I made the pattern pieces and cut the fabric the same way as the cushions, but I sewed just the sides, so I ended up with tubes.  My glider arm cushions snap onto the chair at the top and bottom.  At first, I was going to sew them completely in and then slit some holes where the snaps are until I realized that the snaps are completely hidden.  So I slipped the tube/covers on the cushions, pinned one side to the cushion to keep them from sliding off and snapped them onto the chair.  I didn’t even need to pin the bottom side.  It’s snugly snapped in and well hidden.

The foot rest was next.  I cut out fabric the size of the top plus a half-inch seam allowance, and added 4-inch bands around the side.  When those were all sewn together, I hemmed the bottom to make it nice and straight and an even depth.

So there it is.  A glider makeover for a little girl’s room, all pink and fluffy and soft.  And it was so much easier than I thought it would be.  I think it will make those 4 a.m. feedings much more pleasant, don’t you? 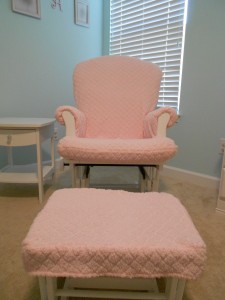