Last week, I was getting ready for my first craft fair and kind of stressing about it.  Surprisingly, what was frustrating me the most was that for the life of me, I could not make a “Thanks a Latte” tag to go along with my gift display.  I couldn’t get a hold of my super-scrapbooker neighbor to get help, so I just gathered some random and very basic art supplies that I scavenged from my around the house and threw together.  What I got was….ugh: 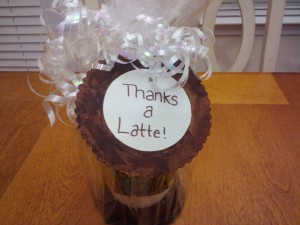 Now, I’m no paper crafter, but this is bad, even for me.  But it would have to do.  I mean, I still had actual sewing to do for the craft fair, I really couldn’t spend more time on a tag for a display/giveaway.

More than a little annoyed, I headed off to my Junior League meeting.  I had glanced at an e-mail and vaguely comprehended that the paper guy from Real Simple magazine would be speaking.  I got to the meeting and the president seemed a little too excited about the evening.  Seriously.  It’s a Junior League meeting, it’s not like you’re going to get a pedicure and cupcakes. But wait…did I just hear her say ‘breakout groups’?!?!  What the heck is going on?  Then Matthew Sporzynski (the guy that makes the amazing Real Simple paper photos and the Sherwin Williams print ads) got up and showed us some of the things he’s done and then said told us he brought plenty of paper for us to make a gardenia with him during the breakouts.

Yes, and yes!  My little crafting heart was pounding in joy and delight!

I had actually wondered who ‘the paper guy’ was when I first subscribed to Real Simple.  I imagined him to be a middle-aged, slightly stocky man, balding with a ponytail and who always wore a black turtleneck and that said things like “Yoo theenk dees is ‘just’ paper?  Dees is ART!!!  Go away! Doo not talk to mee!”  In my imagination, he really did have a really bad fake French accent and a major stick up his butt.  I’m not making this up.  I wish I were.  And I wish I knew better than to put this in a blog, but I apparently don’t.

But my crazy imagination couldn’t have been further from the reality of who he is. Matthew is a down-to-earth guy, who really has no clue how talented he is.  And I can’t get over how nice he is.  He would sit down right next to us, answer all our questions and encouraged us to take home the die cut leftovers so we could use them as patterns to make more gardenias (and even let us take extras!). Most people who are successful in creative endeavors are very proprietary of their art – it’s their livelihood, after all.  But not him.  He told us what kind of paper he likes and where he gets it, and other little tips to his art.  And you know what?  Every gardenia I saw is different, even though we all had the same materials and the same instructions.  That just shows what I always thought…if everyone in the world made were given the same materials and instructions to do anything, you still wouldn’t have two idential copies.

I asked him how he began creating paper images, he said that he grew up in the country, but didn’t like to be outside.  So he just went for whatever he could find.  But this is what got me: his original passion was actually sewing but his dad wouldn’t allow it, so he began fiddling with paper, and here he is today.

Hearing that he found inspiration from sewing to channel into paper crafting on the day that I was having trouble going from sewing to paper crafting gave me a new outlook, lifted my spirits and re-energized my creativity.  I’m amazed that on the same day I struggled to come up with something as lame as the ‘Thanks a Latte’ tag above, I was able to create this: 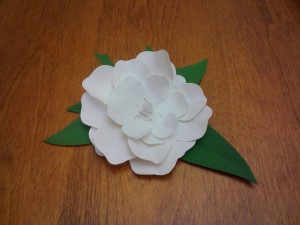 I’m so thankful to have had this opportunity come up so unexpectedly. It came at exactly the perfect time.

What about you?  Has inspiration ever found you when you least expected it?